I recently completed my first campaign of Shadow of the Demon Lord (aka SotDL), so I figured I’d write down my impressions.

I won’t go terribly deep on details about the system, as plenty of articles already exist about that. 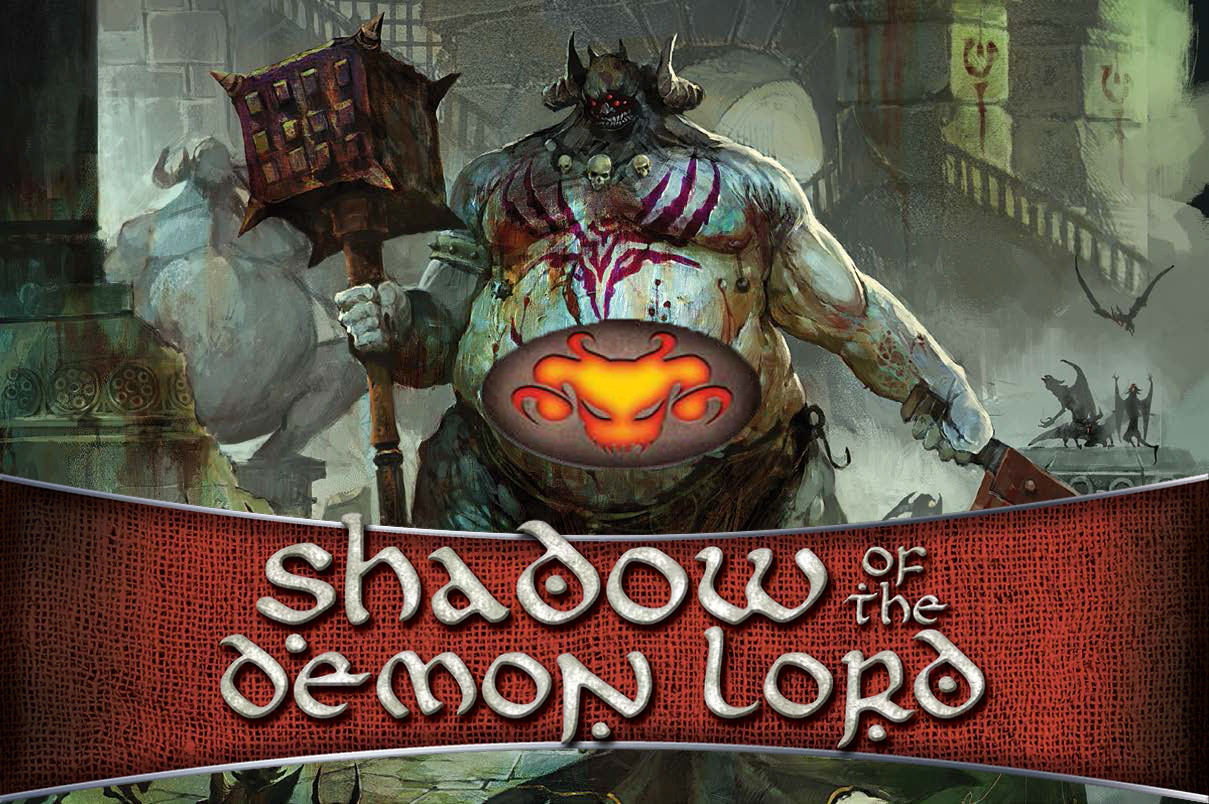 My group mostly plays D&D 5e but was very open to the idea of trying SotDL. One of the big selling points was the relatively short campaign length (11 adventures) and fast character progression (one level per adventure), which didn’t require a long-term commitment.

Aside from that, SotDL seemed close enough to D&D to avoid a huge learning curve, while bringing some intriguing new things to the table, such as the path system, a relatively fast yet sufficiently tactical combat system (fast/slow turns, boons/banes), and a grim vibe involving insanity and corruption.

We started with a fetch quest, through which the characters inadvertently enabled an evil cult (The Sisters of the Blue Hand) to bring a demon prince into the world. The demon prince utterly devastated Caecras (the Empire’s capital), resulting in severe destruction and chaos - all on top of the already compromised Empire due to the recent Orc rebellion.

The only known way to destroy the demon prince (and thus redeem themselves) was via a ritual involving priests of all the major religions. Obtaining the necessary support formed the bulk of the campaign and provided the necessary adventure hooks. For example, they had to clear out an infested Dwarven mine, help a priest of the New God to uncover a traitor, and rescue Orc priests from hungry giants. They also had a chance to confront and defeat their arch nemesis (the high cultist of the Sisters of the Blue Hand that had tricked them).

Finally, they were ready to travel to Caecras (or the wasteland that remained of it), in order to conduct the ritual from the top of the highest spire. This turned out to be one of the ancient spires dating back to the Faerie times, which was impervious to the demon prince’s force. Of course, the inside of the spire turned out to be a hidden Faerie kingdom, resulting in some much overdue Faerie encounters, and finally a dramatic showdown as the priests completed the ritual on top of the now exposed spire, while evading the demon prince’s attacks.

Most of the priests and their retinue went mad and one priest threw himself from the spire, but the characters miraculously escaped with their lives - albeit with some insanity and corruption that would continue to haunt them for the rest of their lives.

Overall, the campaign took about 15 sessions. Most adventures were completed in a single session, but some ended up spanning two. I think the group enjoyed the story, although I feel it might have been a bit too “epic” for this game, relying on the heroic characters to save the world. I might keep my next campaign a bit more low key, dealing with more everyday horror than epic heroics.

Creating a level 0 character is very quick, as you only need to pick an ancestry (e.g. human, dwarf, clockwork, etc.) and define your background, including one or more professions (which don’t have any immediate mechanical bearing). Everything else comes later, at level 1 and beyond. I should mention that the ancestries diverge nicely from the well trodden path. Yes, there are humans and dwarves, but there are also clockworks (mechanical beings infused with a soul from the underworld), changelings, faun, and other options.

I had bought the various supplements in the Victims of the Demon Lord series, which provide additional background on each ancestry, as well as additional tables to roll on.

We went all in on random background generation. One of my players was a bit uncertain at first, but everyone ended up enjoying the process and the (often quirky) results. For example, the goblin in our group ended up with a third hand attached at the hip, as well as a large bag of flour as her interesting item. I would highly recommend going with the random generation process, which adds a lot of flavor.

Character progression is very quick: characters gain a level at the end of each adventure (so typically at the end of each session, sometimes every other session). We quite liked this, as it allowed the characters to evolve significantly over the course of the relatively short campaign. You would probably want to adjust this if you’re planning to use SotDL for a longer term campaign, but for us, this was one of the big selling points. I also like the fact that it uses milestone advancement, as I’m not a fan of tracking XP.

SotDL uses a path based system that results in increasing level of specialization, while allowing for almost endless combinations. At level 1, characters pick a Novice path, which provides a very broad direction similar to D&D classes (Warrior, Magician, Priest, Rogue). At level 3, they pick from 16 Expert paths, and at level 7 from a huge (70 or so) number of Master paths.

But previous path and ancestry choices continue to be relevant: At each level, characters gain an advancement from exactly one place, alternating between their ancestry, novice, expert, or master path. This makes advancement pretty quick and straightforward, although selecting magic spells and traditions might take some deliberation.

Combat and other Mechanics#

The d20 roots are very obvious here, but there are some nice innovations that streamline things a bit.

I also like the boon / bane system, which replaces complex modifier arithmetic: Each advantage (such as high ground, a relevant profession, or a special talent) grants a boon, while each disadvantage results in a bane. Boons and banes cancel each other out, similar to advantage / disadvantage in D&D 5e. At the end, you roll a number of d6 with your d20 and either add the highest d6 result to your total (in case of a boon) or subtract it (in case of a bane). In practice, this did occasionally result in some accounting, but still less than typical modifier systems.

My players are fairly tactically minded, so we usually played with miniatures. I briefly experimented with the zone based abstract combat system from Forbidden Rules, which worked pretty well and facilitates “theater of the mind” style combat. I’d probably use this more often next time.

There are plenty of talents and spells that can really change the dynamics of combat (in our case, the prominent use of the Consistency spell made quite a difference), so there’s plenty of opportunity for players to optimize their tactics.

SotDL has a reputation for being deadly, but at least beyond level 0 or 1, I didn’t really find it any more so than D&D or other games. Of course, that might just be because my players are quite smart and tactical and I’m a wimpy GM. :)

Magic is quite flavorful. Characters need to first discover magic traditions (about 30 in the core rulebook) and then learn the respective spells. This leads to a lot of variety, so no two spellcasters are likely to be the same.

Also: The fact that there is a “Hateful Defecation” spell that does exactly what you might think it does probably says everything about this system… ;)

The core book is everything you need to run the game, with plenty of material for an entire campaign.

Having said that, there are several medium size sourcebooks, most of which I strongly recommend: Companion 1 and 2 (new paths, ancestries, and magic spells), Forbidden Rules, Terrible Beauty (everything about Faeries), Uncertain Faith (religion), and my favorite, Hunger in the Void (cults, demons, etc.).

In addition, there’s an almost ridiculous number of small supplements (see homepage / DriveThruRPG), and a new one comes out roughly every other week. Keep an eye on the (very friendly and helpful) G+ Community for announcements. They are organized into various series, such as Monstrous Pages (new monsters or more details about existing ones), Lands in Shadow (mini sourcebooks for various regions), Paths of Shadows (more options for various paths), Poisonous Pages (new rules and ancestries), and of course Adventures. Most of these only cost a few bucks, and they are often on sale.

The adventures are nice and short (often just a few pages), which makes it easy to slot them into an existing campaign. Even though my campaign was mostly homebrew, I ended up using one or two standalone adventures, as well as one or two of the adventures from the “Tales of the Demon Lord” campaign.

Overall, I feel like I’ve barely scratched the surface in my first campaign, and I’m itching to run another campaign to leverage some of the other material. There are still a lot of lands to explore and weird monsters to encounter. But again, all of these are entirely optional, and you can totally get by with just the core rulebook.

First off, I will definitely run Shadow of the Demon Lord again. In fact, I think this might very well be my go-to d20 based game going forward. I would also welcome the opportunity to experience it as a player.

I might tweak a few of the rules for my next campaign. For example, we used the Regroup rule from Forbidden Rules, which gives characters an additional opportunity to heal once per day. We also used the optional group based Fortune rules. All of this ended up reducing the threat level quite a bit. I think I’d prefer a more gritty, dangerous game next time.

There is so much setting material that it’s hard to decide what to focus on next. Perhaps the Desolation (way up in the North, overrun by the undead). Or perhaps a maritime / pirate based campaign. But there’s also plenty of the empire that we haven’t explored yet, such as the Nine Cities…

Robert Schwalb and his team have done an amazing job with this system and setting, and I’m already looking forward to my next campaign.